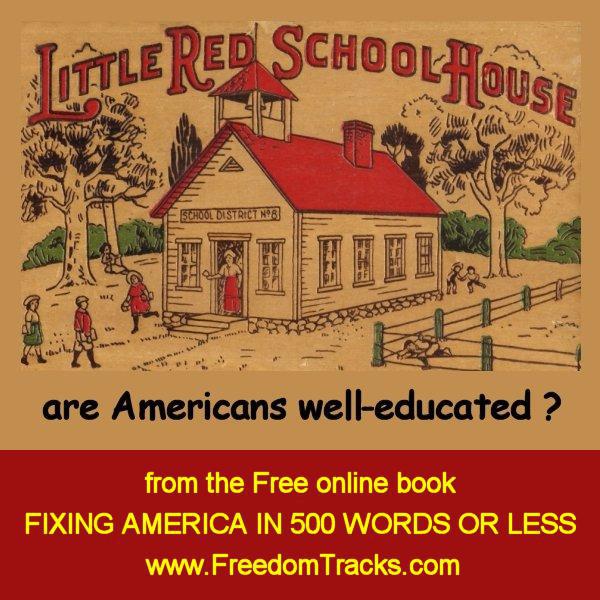 Albert and Agnes attended the same American Elementary School in Anytown, USA.  From the first day, they were both taught to study hard and get good grades, so they could receive a scholarship, attend college and earn more money.

They weren't taught to treat other people like they wanted to be treated, a theory long censored from American classrooms.  Nor were they taught education should be focused on learning what is true so we can be free, rather than being focused on money, another theory long forbidden in American schools.

Albert's wealthy parents had paid for him to attend a private preschool.  He now attended public school because his father believed it was good for him to associate with “regular” children.  Agnes' parents were poor and poorly educated and thus, she was already far behind a learning curve Albert easily adapted to without hardly trying.

Though rarely paying much attention, Albert received mostly A's throughout his American school experience.  Several times he was caught dealing drugs and was twice accused of treating Agnes inappropriately.  But his wealthy family hired an expensive lawyer, who convinced a friendly judge to keep his record clean.

Agnes tried hard to learn, but her grades remained poor and she fell behind a year after Albert forced an unanticipated pregnancy.  Albert was taught from an early age he was smarter and better than most of his peers.  Constantly applauded for superior intelligence, he became president of his high school science club and won two state spelling bee championships.

Agnes was ridiculed by other students for being the plainest, poorest and mentally slowest student in class.  Her teachers told her parents she meant well while insinuating she wasn't exactly born to achieve intellectual greatness.

Agnes went to work in a garment factory, where she helped organize a sweat shop union and consequently, lost her job.  She tried to read the Bible but reading wasn't her best subject and, her strange archaic English translation was difficult to understand and relate to.  Nevertheless, soon she moved to one of the poorest slums in India and founded a mission without any money or religious organizational backing.

Agnes remained very poor throughout her life but, by an incredible twist of fate, she eventually became one of the most famous people in the world.  Rock stars and presidents waited in line to meet her.  Because of her example, missions to help the poor were established all over the globe.

Agnes ultimately helped raise billions of dollars to aid the sick and poor and, will long remain an international inspiration for generations to come.  Are Americans well-educated?  You decide.