Can Charles Darwin Be Trusted? 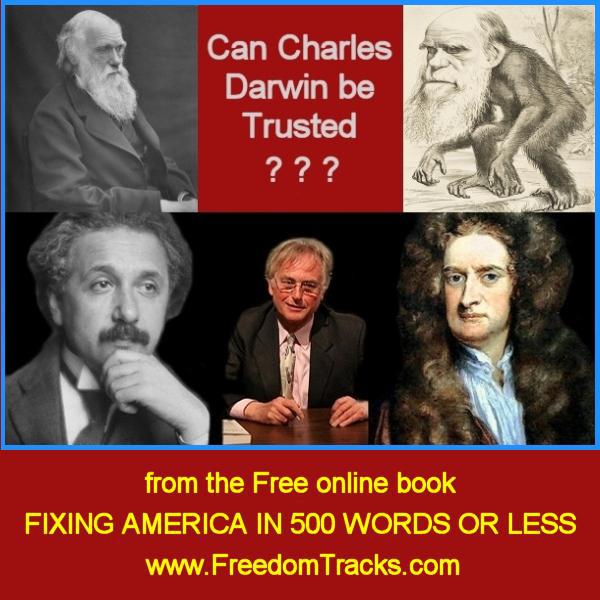 Historical people, like the rest of us, sometimes contradict themselves and often change their minds over time.  It is generally fair to conclude what scientists say in their older age represents their true lifetime professional opinion, rather than what they might have said when they were younger.

Human language definition often changes over historical time and words sometimes develop multiple meanings.  To be fair and accurate, one must consider how words were defined when they were spoken, rather than how those same words might be defined today.  Careful historians apply a discipline called “philology” to help understand human language in historical context.

For example, broad-brushing the American founders as “deists”, a consistent bad habit of modern educators, is a historical lie.  The majority ascribed to some form of Christianity and, the very few who claimed to be deists apparently believed God hears prayers and interacts with human affairs.  There is no evidence any American founder was a deist as the term is normally defined today.

Charles Darwin, in the opening sentences of his final revision of “On The Origin of Species”, is humble enough to credit our Creator for being behind whatever universal processes and reality there may be.  This edition was published about five years prior to Darwin's death and thus, it represents a lifetime conclusion.

Some 'scholars' today, pretending they can somehow know Darwin's intentions, claim that he only mentioned God to make his wife and family happy and to otherwise appease the religious leaders of his day.  Because Darwin throughout his lifetime consistently openly debated with religious leaders and others concerning his ideas, such a claim has no historical merit.  One might fairly ask, if we can't trust Darwin regarding this most fundamental of human beliefs, how can we trust anything else he said?

Perhaps Darwin made no mention of our Creator in his first edition because the overwhelming evidence for creation was agreed to by the vast majority of scholars of his time.  Maybe only after the publishing of his theories had caused considerable controversy, did Darwin then find it necessary to place our Creator where he, like Einstein and Jefferson apparently believed God belongs, far above all human science, reason and understanding.

In a letter published two years before his death, Darwin strongly denies being an atheist, saying his mind was “mainly agnostic but not entirely”.  Because agnostic at that time sometimes referred to distrust in religion and human claims about God, rather than questioning God's existence, Darwin could attest to our Creator and still remain agnostic but not entirely without contradiction.

Is it fair to pretend one of human history's greatest scientists can't be trusted to be honest regarding what he fundamentally believed?  Is it fair to just arbitrarily ignore various words ascribed to Jefferson, Einstein and Darwin because modern liars don't like what they actually said?  Is it fair to speak for historical people, rather than allowing their own words to speak for them?

Can Charles Darwin be trusted?  You decide.