Can We Afford to House the Homeless? 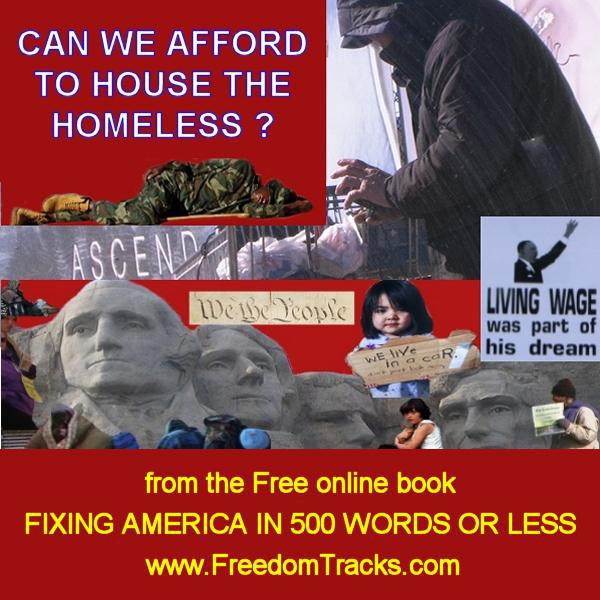 Unlike many cities continuing to pour taxpayer dollars down the drain arresting, jailing and re-arresting the homeless,  Utah has since 2005 began offering those without shelter an apartment and, the entire state is on pace to eliminate homelessness by 2015.  While housing the homeless for no cost might not be the best idea, most certainly housing them for one-third of their income, regardless of what it is, would save taxpaying citizens significantly.

Not included in the above calculations, are many other additional not so obvious costs to taxpayers when cities refuse to provide affordable housing.  Perhaps most importantly and least understood by American citizens in general, it is a well-established historical fact that pandemics and plagues typically arise among the poorest sections within large urban areas, where adequate shelter, nutrition and medical care is most lacking.

Scientists for several years have been warning that major plague is long overdue and could erupt at any time here in the 21st Century.  Disease knows no economic or other boundaries and can quickly spread in all directions upward and outward.  It isn't an exaggeration at all to say that failing to provide adequate shelter, nutrition and medical care for everyone within our borders, is simply begging for national and global disaster to erupt.  No one is safe from contagious diseases, regardless of how wealthy or insulated we may be, nor are any of our own children.

Many millions of federal, state, county and city tax dollars are spent in various ways on social outreach services and similar programs that would not be spent if there was no homeless population.  And, many billions more are spent by private charities, where much of this is donated by taxpaying citizens.  The total cost of private donations combined with various taxpayer funded social outreach programs, significantly adds to the cost of not housing the homeless.

With all costs included, it is at least 50% less expensive to house a homeless person, charging them one-third of their income, than to not house the same homeless person. American cities could begin buying up vacant homes and other structures and start housing the homeless, which would have the added benefit of reducing crime, stabilizing and driving up property values in distressed neighborhoods.

Can we afford NOT to house the homeless?  You decide.