Do Americans Really Believe in the Constitution? 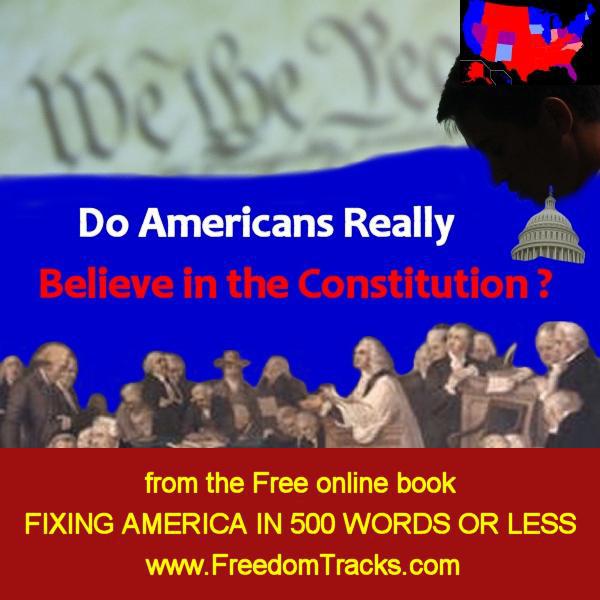 We the People of the United States, in Order to form a more perfect Union, establish Justice, insure domestic Tranquility, provide for the common defense, promote the general Welfare, and secure the Blessings of Liberty to ourselves and our Posterity. . .”

The first thing we learn from the Preamble is that “we the people” are the government.  Not surprisingly, Americans who claim to stand for “smaller” government generally back an agenda that appeases a minority and is harmful to the majority of we the people.

The second thing we learn is the Constitution's authors didn't believe they were creating a perfect government.  Rather, they wanted it to be “more perfect”, better than previous governments.  Far too many Americans oppose wise policies because they aren't perfect, which policies created by imperfect people never will be.

The next purpose stated in the Preamble is to “establish justice”.  Many Americans support unjust policies that are against the human and civil rights of minority, working class, poor and other citizens.  Many support policies denying American workers and others the right to freely organize and demonstrate against injustice.

The fourth purpose the Preamble states is to “insure domestic Tranquility”.  The word “gun” doesn't appear anywhere in the Constitution.  Is it insuring domestic tranquility to allow every Tom, Dick and Harriet to own as many “Arms” as they wish, which today include machine guns, tanks, biological weapons and nuclear bombs?

Next we find “to provide for the common defense”.  Defense is just one of several stated purposes of the Constitution, yet many politicians and other Americans today act as if this is the only purpose of government, ignoring the rest of what the document clearly states.

The Preamble then says to “promote the general Welfare”.  Yet many Americans oppose universal health care, affordable housing, job programs, infrastructure rebuilding and many other things clearly needed for the general welfare of ourselves and future generations.

Don't Americans realize that people without adequate nutrition, shelter and health care more easily become ill and spread contagious diseases?  Don't we realize children without a strong educational and moral foundation become our society's burdens of tomorrow?  Don't we realize unjust policies indiscriminately harm everyone, including ourselves and our own children?

The Preamble says the purpose of the Constitution is to “secure the Blessings of Liberty to ourselves and our Posterity”.  Why do so many Americans oppose environmental and other legislation desperately needed to secure the blessings of liberty for our ourselves, our children and our children's children?

Do Americans really believe in the Constitution?  You Decide.