Does the ACLU Really Support the First Amendment? 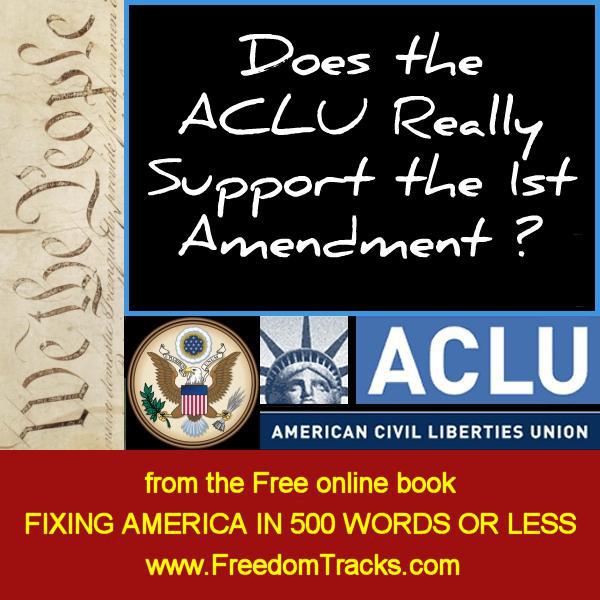 According to the 1st Amendment of the Constitution: “Congress shall make no law respecting an establishment of religion, or prohibiting the free exercise thereof...”  This amendment clearly meant something far different to the Constitutional framers than many today pretend.

Jefferson began editing the New Testament in 1804 while a sitting president.  After drafting the 1st Amendment, Madison stated it would aid in the spread of Christianity. Franklin, a self-proclaimed deist, openly complained the framers weren't seeking God's guidance enough while drafting the Constitution.

Many today interpret “church” to include belief in God, while this term in the 18th Century referred to institutional religion.  Belief in God clearly does not equate with “church” within the writings of Jefferson. Regardless, freedom of speech isn't dependent on what is actually true about either God, history or science.

Legitimate American polls report 80% educators, 75% physicians and 50% of U.S. scientists believe in God.  Even though so many agree the evidence demonstrates design, the ACLU refuses to protect their credentialed scientific conclusions. Instead, the ACLU demands American educators deliberately lie to our children by omission, leaving out the fact major historical and many living scientists and every Declaration signer believe(d) the scientific evidence demonstrates design.

The “God question” is central to the scientific thought and inquiry of Darwin, Einstein and every major historical scientist.  Yet many today pretend God is not a question for science, including some of the same “progressives” angry over the one-sidedness of talk radio.  To allow only one myopic viewpoint is to teach our children questioning what is true isn't relevant to education.

Modern evolutionists do in fact, address the “God question”.  Any theory assuming life is a result of "unguided" processes is pretending there is no God and, is scientifically irrational.  Our extremely tiny window from inside an immense universal fishbowl can't possibly determine the universe is either not created or unguided. Atheism has no more protection under the 1st Amendment than any other religion.  Is freedom of speech or science really being served when our children are taught only one grossly superstitious non-evidence based assumption?

The Encyclopedia Britannica and astronomer Neil DeGrasse Tyson freely admit science doesn't know how life came to be. Life may predate our own sun.  Thus, it is an obvious lie to state life came about by "blind, natural, unguided" processes, as Tyson grandly proclaims in the television series "Cosmos", without providing a shred of supporting evidence.  Tyson later contradicts himself, saying scientists shouldn't be afraid to admit what they don't know.  If science doesn't know how life came to be, this is what we should teach our children.

Should we forbid Socrates, Plato, Aristotle, DaVinci, Newton, Copernicus, Galileo, Faraday, Jefferson, Madison, Franklin, Einstein and leading DNA expert Francis Collins to teach a public science class?  Or, should we instead, provide our children with a proper education based on a search for what is true, while fairly and objectively presenting an accurate overview of what various scientists actually believe the evidence demonstrates?