Does the NRA Really Support the Second Amendment? 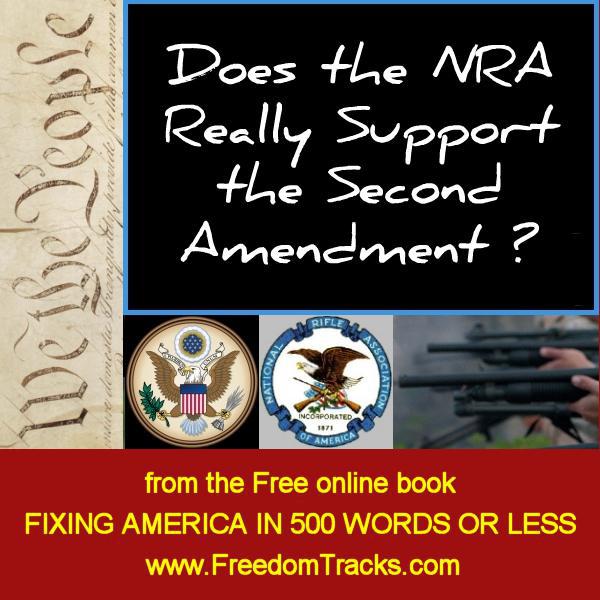 According to the Second Amendment of the United States Constitution, ". . . the right of the people to keep and bear Arms, shall not be infringed".  The word "Arms" is deliberately capitalized, a common practice at the time used for emphasis.  Since Thomas Jefferson later owned a private cannon, the largest weapon of his day, "Arms" to the framers clearly meant more than small arms one can easily "bear"; note, to "keep" and bear Arms.

The word "gun" is found nowhere in the Constitution, a carefully worded document. According to the preamble, one of the main purposes of government is to "insure domestic Tranquility" (also capitalized).  To honestly and correctly interpret the intentions of the framers, everything that follows the preamble, including all ten original amendments, must be weighed in light of the Constitution's stated purpose.

At the time the Second Amendment was drafted, there was no federal army, no national guard and no organized police force, a fact of history ignored by the modern National Rifle Association's absurd position, which not long ago was far less radical than today.  There were also no large urban populations or police protecting them, gravely endangered by modern assault weapons. And, who knows what horrific weapons may be contained in a future brief case or even much smaller space?

For many years, the NRA and mainstream media have been guilty of drawing a non-existent, artificial line down the center of the Second Amendment, limiting the debate to private gun ownership.  To contend the Second Amendment permits unlimited private ownership of modern assault weapons is no more Constitutionally rational than to clam it allows for unlimited private ownership of bombs, chemical weapons and space-ray machines, also modern "Arms" unknown to the American founders.

The NRA must admit that according to it's interpretation of the Second Amendment, we have just as much right to own private nuclear bombs and bio-weapons as we do to own a multi-round handgun, none of which existed when it was drafted.  If we wish to have a society at all, then the 21st Century question is not “if” we are going to restrict the NRA's interpretation but rather, in what manner are we going to restrict it.

For the record, if any living Americans have the right to argue in favor of restricting the Second Amendment, it is Bill and Sarah Brady. And, as the “founding fathers” wisely allowed for, we can always amend what the Constitution originally stated.  A perhaps better and much saner idea would be to amend the NRA, by forcing a reluctant media to point out it's deceptive and highly irrational position.

The NRA has no Constitutional or other right to limit the Second Amendment to a debate over guns, nor to ignore the intentions of the American founders clearly stated in the preamble.  For a Constitutional position to be correct, it must fall within a clearly stated purpose of, “in order to insure domestic Tranquility”.

Does the NRA really defend the Second Amendment?  You decide.