How Appalling Can City Leaders Be? 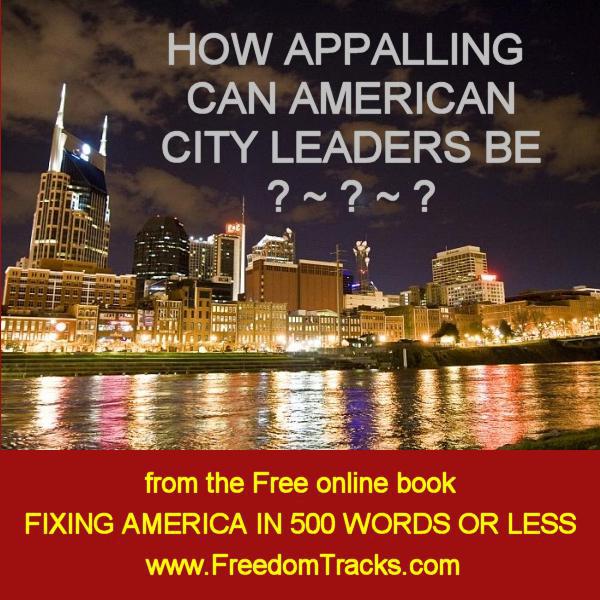 Studies conducted by Philip Mangano, former National Homeless Policy Czar under both presidents Bush and Obama, reveal that it costs taxpayers far more to not house a homeless person than to house the same homeless person.

Costs for arresting and jailing America's poor, as well as costs for hospitalization, medical expenses, shelters, social workers and other taxpayer supported services, can range from $35,000 to well over $150,000 annually per homeless individual, while costs to house the same individual range from $13,000 to $25,000 annually.  Many homeless people are employed, receive social security or some other income and, when cities charge them 30 percent of their income for housing, annual savings can be considerably more.

According to The Contributor newspaper, Metro Nashville made 4,175 homeless related arrests in 2012, mostly for trespassing and obstructing a passageway.  It makes no legitimate or rational sense at all for any city to be engaging in such cruel and immoral practices, as arresting American citizens for the 'crime' of being poor solves absolutely nothing.

The same individuals are soon back on the street and re-arrested again, often a great many times, all at taxpayer expense.  Nashville's homeless citizens are frequently fined considerable amounts they can't afford to pay and, failure to appear or resolve such charges on their records, makes it even harder for them to find permanent employment and housing.

We as long-suffering taxpayers need to inform our district attorney, mayor, city council members, chief of police and other city leaders, that we are appalled when our cities arrest  American citizens for the 'crime' of being poor, rather than constructing affordable housing. which would cost us taxpayers far less, as well as be greatly beneficial to the homeless. Nashville's current city leadership even refuses to provide public restrooms downtown, a clear and present public health danger for tourists and every local resident.

Providing affordable housing in the larger picture, besides being a great blessing for the homeless, would also be a significant benefit for public health, tourism and other business interests and every non-homeless citizen.  And doing so would quite literally save many millions of taxpayer dollars; tax dollars that are currently being carelessly and callously utterly wasted for no good reason at all.

Rather than invading and bulldozing tent encampments of the poor, American cities should be using bulldozers to clear the way for construction of affordable housing. Otherwise, we the voting taxpayers should be using our vote to bulldoze them out of office.

Every conservative, moderate and liberal taxpayer should be very upset and utterly appalled at the cruel, indifferent, grossly immoral and economically nonsensical current approach of many American city leaders and other public officials towards the homeless and poor of our nation.

How appalling can American city leaders be?  You decide.