Is Mainstream Media Even a Little Bit Legit? 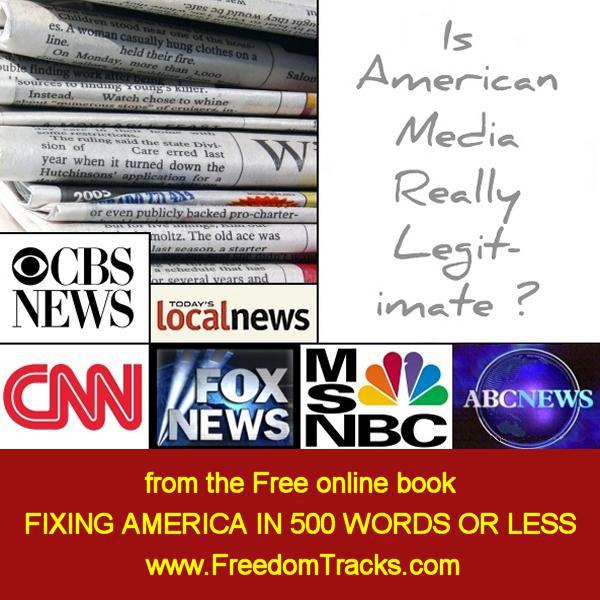 American mainstream media habitually fails to address issues in a legitimate manner that could actually help achieve legitimate reform.  Instead, we are treated to a giant merry-go-round shell game of opposing pundit charades; both “sides” whining about and belittling the other, with neither offering any coherent plan for actually achieving reform.

Amidst growing public outrage over corporate tax loopholes, corporate bailouts and other corrupt political shenanigans, why aren't pundits on either the so-called “liberal” or “conservative” side calling for a national cap on interest rates at a reasonable 5%?  This would do far more to stimulate the economy, insure the long-term health of the banking industry and actually help the average citizen, than all of the nonsensical cosmetic 'reforms' proposed by both sides combined.

In debating private versus public health care, why is there little if any discussion in mainstream  media regarding the obvious immediate and long-term ramifications of contagious diseases?  If conservative mothers actually knew how severely in danger their own children are even if insured, we would have had universal health care long ago, like any rational government today should and does provide.

Why is media discussion about the damage pollution does to human health largely absent?  Why is the media instead focused on arguing about climate change?   Even if pollution were somehow beneficial to the planet, it remains a long-established irrefutable medical fact that pollution is very harmful to people in innumerable and often catastrophic ways.  There never has been or ever will be a rational argument against getting rid of as much pollution as possible, as fast as humanly possible--case closed.

Amongst widespread feigned “outrage” over political corruption, why isn't mainstream media headlining demands for a constitutional amendment banning all political contributions except by private individuals, while limiting those to 1% of the median income per candidate per year?  Given the historical track record of the Supreme Court habitually siding with business interests against any and all legitimate reform legislation, this is obviously the only way to achieve any true political reform.

In 2003 CBS featured a so-called  “liberal” Dan Rather embedded in real-time, literally fawning over Bush's illegal invasion of Iraq, whispering with hushed reverence how adept our military is at invading and bombing a city full of civilians into “democratic” submission.  When systemically corrupt leadership wages foreign wars of aggression, wars obviously designed to enhance oil, war machine and other corporation coffers, mainstream media is habitually found in patronizing flag-waving lock-step synchronization, firmly “embedded” in unchallenged support of such barbaric atrocities.

What is the real agenda behind the carefully controlled piece-meal information doled out by the New York Times and Wall Street Journal?  Is CNN, MSNBC, Fox and other mainstream noise  providing us legitimate information we really need?  Why aren't American mainstream media outlets informing us correctly and adequately regarding the major issues of the 21st Century?

Is mainstream media even a little bit legit?  Or, is it just a disguised commercial megaphone trumpeting the blessings of global corporation domination?   You decide.

Link to Footnotes and Documentation for this Article www.freedomtracks.com/500/media.html