Is Music City Becoming the Meanest City in America? 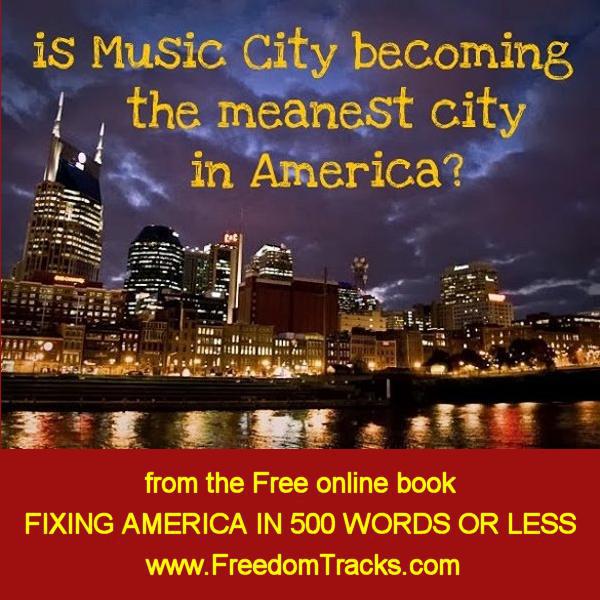 In July and August of 2013, I interviewed thirty-five homeless and formerly homeless individuals in Nashville, Tennessee.  Virtually every one said they have been harassed, cited and arrested multiple times for trespassing, often when not acting any differently than non-homeless persons who were not arrested.

At taxpayer expense, city leaders have removed some public benches and installed other benches with bars so the homeless can't lie down. The homeless say there is literally no where for them to go, sit, walk, drink water or go to the bathroom without fear of being arrested for trespassing.  Most say they have been fined significant amounts for the 'crime' of being poor.

The homeless say some Nashville police officers are fair, while others go out of their way to constantly harass, cite and arrest them when acting no differently than the non-poor who are not arrested.  Many say they've been arrested for intoxication when sober.  Several claim the police routinely search their belongings without probable cause, frequently kick them out of public parks and authorities have confiscated and destroyed their belongings.

The homeless situation in Nashville is much worse than city leaders claim.  One day walking only a few blocks from the downtown bus terminal to Church Street and back, I interviewed thirteen homeless individuals, while many others passing by appearing to be homeless. Many Nashville citizens have been homeless for several years.

During tourist events, the homeless say police conduct general sweeps of the downtown area, arresting people for appearing to be poor.  A homeless man on crutches said he was arrested for walking diagonally across a store parking lot.  Several claim they have been harassed while selling a homeless newspaper.

One said he was arrested for obstruction because his shoe touched a public sidewalk.  Another said she has witnessed numerous homeless citizens arrested for trespassing while on public property.  Several say their belongings have been stolen at the mission; some claim they have been physically harmed there.

Homeless veterans told me the police show them no respect and treat them as badly as the rest.  We expect police officers to protect us from real criminals who murder, rape and steal.  Nashville citizens should demand that city officials immediately cease wasting our tax dollars harassing, citing and arresting people for the 'crime' of being poor.

Let all Nashville citizens who fear God demand that our city immediately begin constructing enough affordable housing and install public restrooms downtown.  It is far less expensive and more wise in every way to house the homeless, than for cities to repeatedly arrest and run them through legal, health and social services.

Music City's lack of affordable housing, lack of basic common health sense and common decency to even provide public restrooms and ongoing harassment of the poor, is an open American shame.  Last year alone, over thirty homeless citizens died in the Nashville area, including a man who froze to death on a downtown church's steps.  And, that is over thirty American citizens too many.