Is President Obama Any Smarter Than Bush? 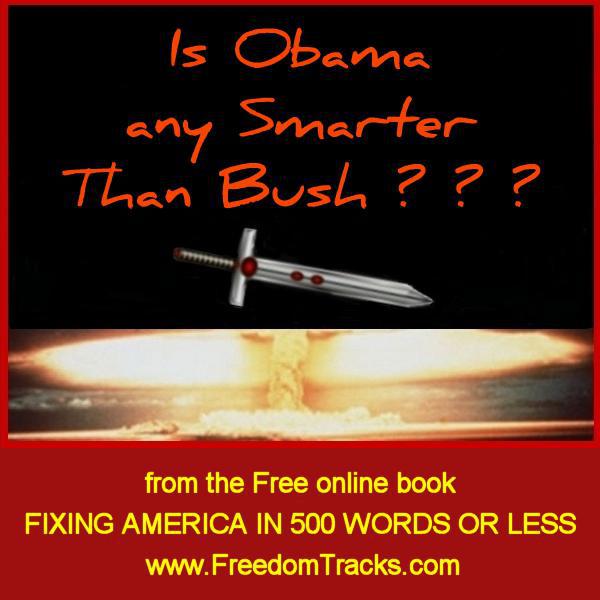 According to George W. Bush, the United States invaded Iraq to “secure the peace” and, to “secure freedom and democracy”.  Is there any rational reason to believe this?   If war can secure peace then why, after 10,000 years of war, isn't there peace on earth by now?

War didn't begin or end with the American Revolution; soldiers who fought against the British soon rose up in “Shay's Rebellion” against wealthy colonists who were taking their land and casting them into debtors prison.  Soon after, another war against England erupted.

Then came the Mexican-American War, Civil War, Spanish-American War and War in the Philippines.  And then WWI, the so-called “war to end all wars”, soon followed by WWII, Korea, Vietnam, Gulf War, Afghanistan and Iraq.

Spaced among this long bloody trail, were slave uprisings, a long drawn-out war against Native populations and many smaller conflicts.  Along with much targeted violence within the U.S., including mob murder of African-Americans, Irish, Jews, Mormons, Chinese, Latinos--even striking child workers have been murdered.

Yet today, after all this bloodshed, we find ourselves still at war. In spite of overwhelming historical evidence, a morally bankrupt America remains quick on the trigger and very slow to understand war has never ever secured the peace.  Did President Obama act any wiser than Bush by increasing troop levels in Afghanistan?

Some might assume people like Gandhi are foolish because they end up as martyrs.  Yet, Martin Luther King, Jr., Cesar Chavez and many others claim he inspired them.  Did Gandhi lose in the great historical battle for human rights, the battle against good and evil and only war that really matters?

Jesus has inspired millions to promote peace and goodwill.  Though martyred at a young age, he won a far greater victory than all of the military generals in history combined. According to Jesus, the solution to war is to put down our swords.  Though a small child can easily grasp this crystal-clear logic of Jesus, many today pretending to follow him support U.S. wars of aggression.

We as individuals have little choice what our leaders or other people do.  However, we each have a personal choice to make, to either stand up for peace and goodwill or, bow to peer pressure and promote war and other violence.

It takes courage to stand up against one's own society, which is why Isaiah and Jesus continue to be revered by millions.  While it takes only a victim of societal pressure to promote violence.  It is mature to promote peace and goodwill; it is childish, historically and patently absurd to promote anything else.

Is Obama any smarter than Bush?  When the United States engages in war, whose mission are we really accomplishing?  You decide.