Should We Boycott Walmart and Exxon-Mobil? 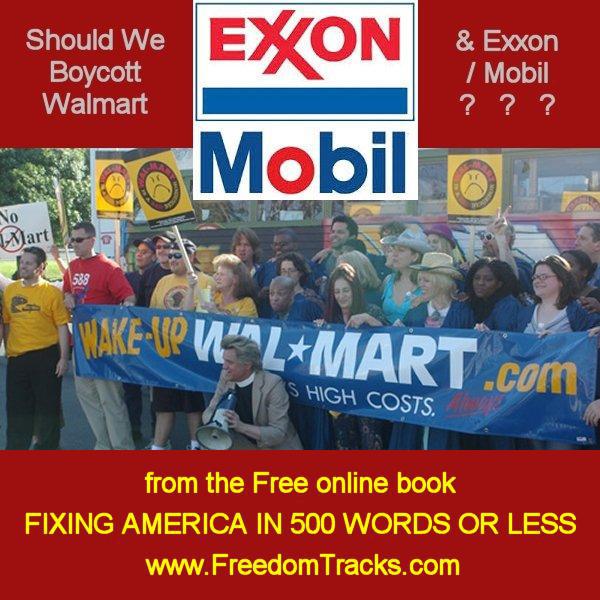 There are sometimes well-meaning but misguided efforts pushed by various organized groups to protest high fuel prices, encouraging consumers to not purchase gasoline on a specific date.  It is highly unlikely such token resistance will result in positive change.

Refusing to purchase gasoline for a day or, just not purchasing from Walmart for a weekend, is ineffective and a waste of valuable organizing time and energy.  It will require significant economic threat to reform the greedy corporations currently holding a corrupt stranglehold on the American political and economic reality.

A much more effective way to protest is for consumers to target boycott Exxon-Mobil and Walmart, agreeing to purchase only from their competitors.  American citizens could force significant reforms, just by agreeing not to purchase from the two worst economic enslaving human rights debasing offenders.

Anyone can protest and complain.  It is quite another thing to act wisely to actually correct what is wrong.  If American consumers had already united using wise activism, as demonstrated by Mohandas Gandhi, Rosa Parks, Martin Luther King, Jr. and Cesar Chavez, we could long ago have corrected several of our worst 21st Century problems.

Attempting to boycott every offending corporation on a widespread basis is an obviously impossible task.  However, if consumers would join together and agree to permanently boycott just Exxon-Mobil and Walmart, until such time as they engage in reasonable human rights, environmental friendly and other fair and just practices, major reform in America could easily and peacefully be achieved.

Target boycotting not only serves to reform the targeted industry or company, it also serves notice on all other companies that if they fail to treat workers and consumers fairly, they will be next.  There is no reason for violence here in the 21st Century, in order to achieve substantial positive human and civil rights gains.  We the people hold the power of the consumer purse.  As such, we have the power to bring greedy corporations and their corrupt political pawns to their nefarious knees, without firing a single shot.

Until Americans stop voting for corporate stooges, stop listening to divisive political and religious pundits and, start practicing wise united activism on a large scale, we will likely continue to march down a freedomless road to historical oblivion.  It doesn't take much courage to complain about what is wrong.  It requires bravery and perhaps a little personal sacrifice, to stand up for actually fixing America.

Where are great leaders of heroism and sacrifice, like Gandhi, Parks, King and Chavez, when we need them the most?  Should we boycott Walmart and Exxon-Mobil?  You Decide.