Should We Put Our Swords Away? 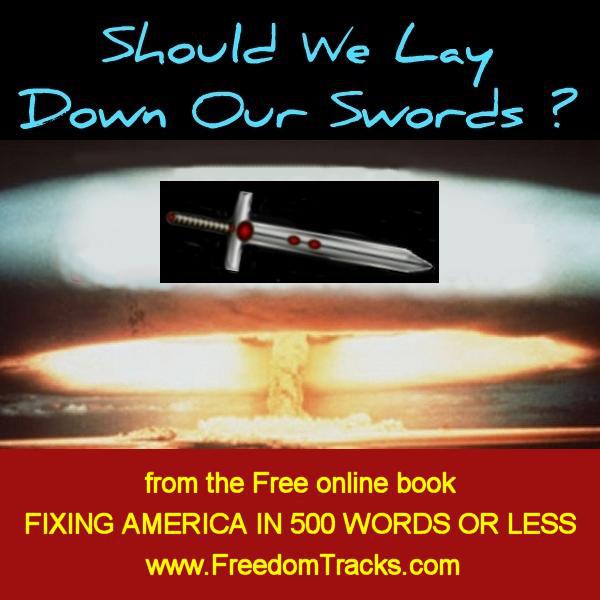 Pacifism is more complex than it may appear.  One form of pacifism is to never strike back, which was practiced personally by Martin Luther King, Jr.  While King was giving a speech, a man jumped on stage and repeatedly punched him.  King refused to strike back while instructing others surrounding the man to not harm him.

Another form of pacifism allows for the defense of one's own physical person and immediate family or small group.  This form is possibly, but not necessarily in agreement with Jesus, when taken in context of several of his teachings.  It is never accurate, as religious charlatans often do, to extrapolate part of what someone says out of context of the whole.

From an accurate historical perspective, war is invariably about either protecting wealth or taking wealth and almost always, war is about both.  War traces from human greed and what causes it and is not the same as self defense, which is protecting one's physical person.

Soldiers are compelled to obey orders from the top down, regardless of how right or wrong they personally believe them to be.  Following such orders in WWII, military pilots dropped two atomic weapons on large civilian populations.

In war, conflicts typically traces to previous conflicts, one side rarely if ever being an innocent victim.  Seeds of WWII trace to WWI and back even before the American Revolution, which was clearly about wealth, taxation being a primary motivation.  The Crusades, often very wrongly blamed on belief in God, clearly trace to the taking and attempted retaking of land and other wealth.

Sometimes WWII is called a “justified” war because Japan attacked the United States.  The problem with this theory is, long before Pearl Harbor, we gained substantially monetarily by supplying Japan and Germany's enemies with weapons.  And at the time we were attempting to blockade supplies coming into Japan, a significant threat to her population's survival.

It is not that Japan was right but rather, war is inevitably about both sides being wrong. No nation profiting from a war is guiltless concerning that war and, attempting to blockade a nation has been long used historically as a military advantage maneuver and deliberate act of war.

Perhaps the best American historical example of justifiable self defense relating to war, is when Colonel Chivington attacked and massacred a tribe of natives sleeping inside their homes with white flag raised.  If there was ever a justified response, it is how American natives responded to Sand Creek.

Jesus taught the way to achieve peace is to put our swords away.  Though apparently too profound for many preachers and educators to grasp, this remains the obvious solution to war, which any small child can easily understand.  This is repeated in the book of Revelation and, those who resort to violence as a means to an end, are placed on the wrong side of God, human rights and human history.

Should we put our swords away?  Are you smarter than Jesus?  You decide.

Link to Footnotes and Documentation for this Article:

from the Free online book; "Fixing America in 500 Words or Less":