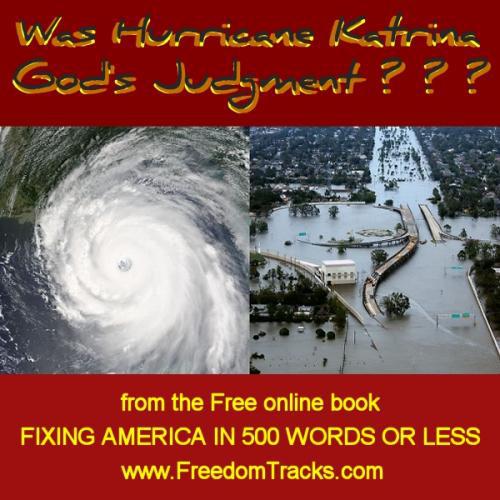 One would assume that if Pat Robertson and John Hagee are correct about Hurricane Katrina being God's judgment on the liberal folks of New Orleans, then it logically follows that recent extensive tornado damage in the conservative rural South and, extending into Hagee's own home turf of Texas, represents the Creator's wrath against pro-war, right-wing religious conservatives.

A recent infestation of zillions of ants in the greater Houston area sounds a whole lot like biblical plagues to me, but who am I, an untrained common layman, to argue?  However, what about the recent invasion of tiny frogs in Bakersfield?  What does our Creator have against Merle Haggard?

And logically following, since citizens of Pat Robertson's red state of Virginia recently voted in record numbers for "godless" liberals Hillary Clinton and Barack Obama, the home of Robertson's onward Christian soldiers of fortune must be high on the Creator's retribution list.

It becomes a rather selective and dangerous path to tread down when those claiming to represent Jesus, while promoting the opposite of what he actually said and did, determine within their own self-righteous minds, to point the fickle finger of judgment at others.  Perhaps there is a good reason why Jesus taught to "judge not, that you be not judged".

If weather is a fair and reliable barometer of God's judgment, then one must consider recent earthquakes in China and Iran, not to mention the great 2004 Indian Ocean earthquake and resultant Tsunami.  And, one could go on and on, about recent horrific fires worsened by severe winds in California, drought in several farm belt states and unusually severe winters in the Northeast.

If one truly believes the New Testament record, as Robertson and Hagee claim to do, then according to what Jesus actually said, God will judge the United States and every other nation by whether or not we help the sick and poor.  And according to the prophet Ezekiel in the Old Testament, God destroyed Sodom because she did not help her sick and poor.

Logically one would assume then, that the most patriotic thing for Pat Robertson, John Hagee and the rest of us to do, would be to stop pointing a finger of judgment at everyone else and instead, start using our energy and excess financial resources to help the less fortunate among us.

Come to think of it, perhaps Robertson and Hagee have a point.  Just why wouldn't our Creator be angry with a nation that's responsible for the deaths of over a million Iraqi civilians and the maiming of millions more, while it's citizens back home continue to ignore homeless seniors, veterans and children, purchase SUV's in the face of looming oil shortages and a global warming crises and, continue to vote for wicked leaders opposing universal health care and endorsing torture and imprisonment without trial?

Perhaps we have been weighed in the great red-blue divided states historical balances and found more than a little severely wanting.  Was Hurricane Katrina God's judgment?  You decide.