What is the Real Right-Wing Agenda? 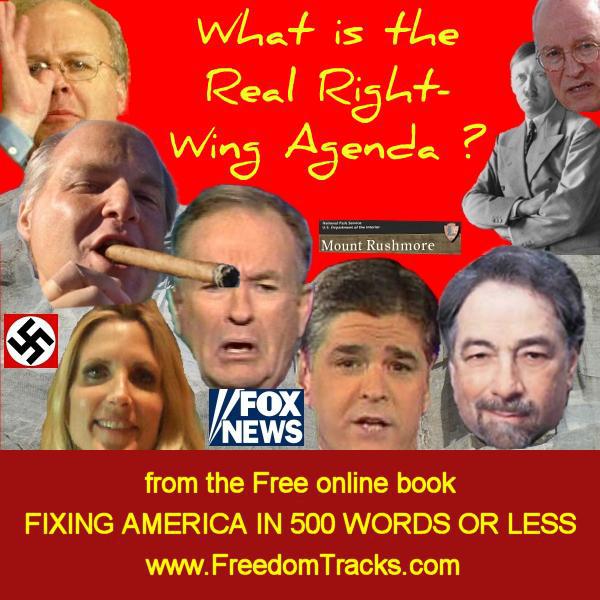 Right-wing extremists are the first to wave flags and pretend how much they believe in the Constitution and yet, they constantly whine and complain we can't trust the government.  Apparently, they were asleep at the wheel during civics class, when the rest of us learned we the people are the government.

Apparently, the so-called conservative "right" can't even get our own Constitution right.  The idea of democracy is not to openly condemn ourselves by claiming we can't trust the government.  Rather, the idea is to elect leaders to represent us and, to replace them when they instead, become right-wing corporate stooges and vote against our best interests.

Besides pretending to care about the unborn while totally screwing the already born, what the right-wing agenda really amounts to is, "we don't believe in spending tax dollars to actually help taxpayers".  Rather, their goal is to use tax dollars for enhancing the bottom-line of the military industrial complex and otherwise, enriching corporations at the expense of us the taxpayers.

Any and every use of taxpayer dollars that will actually benefit taxpaying citizens is branded as "socialism" over and over again, the new all-purpose "red scare" bait-and-switch term of the 21st Century.  The now entirely discredited Joe McCarthy appears “fair and balanced” alongside these Savage Nation and Coulter forty-five toting, hate-mongering megalomaniacs.

Education is supposedly high on the right-wing “safe issue” list, but conservative legislators consistently vote against increased spending for education.  Whatever they can't eliminate because of political popularity, such as Medicare and Social Security, they try to "privatize" into oblivion, creating huge funding black holes designed to funnel trillions of taxpayer dollars into big pharma and other deep corporate pockets.

Otherwise, the right-wing agenda is to convince average Joe Americans that all regulation of any kind is evil.  When in fact, wise regulation is what keeps tainted meat from ending up in all-American hamburgers, Joe American construction workers safe on their jobs and American Air Lines planes from falling out of American skies.

Wise regulation is the reason banks were relatively sound under Eisenhower.  While deregulation is obviously why they began their substantially crooked turn for the worse under Reagan and were completely controlled by gilded-age mongrels of mass deception by the time Bush Junior was finished cutting a final slice out of the deregulation corporate mega-pie.

Is branding human beings “illegal” and blaming them for job losses and contagious diseases any different than what gave rise to Adolf Hitler and Auschwitz?  What is the real agenda of slave masters?  What is the agenda of pure evil?

What is the real right-wing agenda?  You decide.