Where is the Great American Dream? 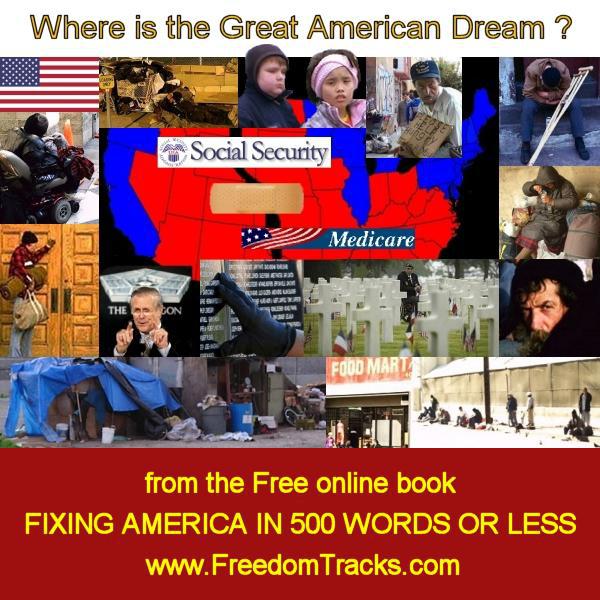 Today, there is a lot of talk about the wonders of science and technology, with little mention of any downside.  The same science used to create medicine and jumbo jets has also resulted in nuclear and bio weapons and, has left our planet polluted possibly beyond repair.  A science that produced the world wide web and remote controlled devices, has created an alternate reality where people interact face-to-face, less and less.

Modern technology is making us more introverted, self-engaged and lost within our own "virtual" existence.  This can be dangerous on many levels, creating a social environment with less and less love and feeling for each other.  It seems like American society is becoming less and less friendly; a society where everybody talks and nobody listens.

I was raised in working-class neighborhoods in the Los Angeles area, where the majority of families were supported by a single wage-earner's income.  Yet I never once heard of a child without access to health, dental and optical care.  Out of 3800 mostly working class students in my high school, I never heard of a single one who was either hungry or homeless.

The term "homeless" was essentially off the public radar in Southern California until after I graduated from high school in 1968.  I don't recall this word being mentioned in any media or in any conversation during my entire childhood.  "Poverty" referred to people living on Indian reservations, in Appalachia, Central and South America and especially Africa.  There was virtually no conception of poverty within our own blue-collar environment.

As children, we interacted with a large group of other kids outside for hours nearly every day.  We often played after dark and in local parks without parental supervision or fear of abduction.  We learned to interact with each other on a face-to-face peer basis and experienced a healthy childhood reality.

Kids today often spend a lot of time alone or with one or two close friends, interacting with computers, movies, television, computer games, texting and talking on cellphones.  Rather than interacting in real life situations, our children are growing up in a virtual world of digital unreality.

Many studies indicate obesity, suicide, attention deficit disorder and other serious problems are on the rise.  Every year brings more media reports of growing school and public space violence.  Our nation is artificially divided by a profit-driven media into "red" and "blue" sides, even though the vast majority of us share common complaints about corrupt leaders and concerns of our children's future.

Today, many Americans working two or more jobs don't earn nearly enough to provide what working-class citizens once took for granted.  Meanwhile, American cities are "dealing" with growing poverty by arresting and criminalizing the poor.  Apparently, we incarcerate a greater percentage of our population than any other nation on earth.

Albert Einstein reportedly said: "It has become appallingly clear that our technology has surpassed our humanity."  "Where have you gone Joe DiMaggio?"  "Where is the great American dream?