Why Are There Homeless Veterans? 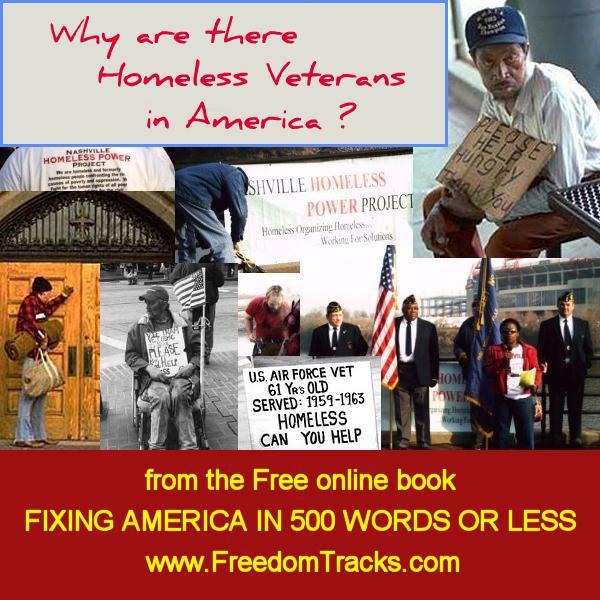 United States Homeless veterans include a significant number from recent wars in Afghanistan and Iraq.  Many suffer from post traumatic stress disorder and severe sleep deprivation, as well as other severe health issues.  Often people who have never suffered from the inability to sleep are unaware of how great of a toll this has in preventing those who do from functioning well enough to hold down a steady job.

Many veterans have lost civilian jobs due to extended tours in Afghanistan and Iraq and upon returning home, find it very difficult to support themselves and their families.   Many who are not currently homeless are in danger of becoming so because of ongoing economic hard times.   At least a half million veterans pay over 50% of their income for rent or a mortgage.

Estimates of the total number of homeless U.S. citizens range from highly questionable official government statistics of under 1 million to far more likely accurate numbers of 3-5 million, over a million being children.   At least 1 in 4 homeless citizens are veterans or spouses and children of veterans.

According to the Los Angeles Times, the homeless population grew in all 25 cities included in a 2013 survey.   There were officially 22,000 homeless children and 52,000 total homeless in New York City shelters, not including the many homeless not in shelters; the official number for L.A. County alone, not including other neighboring counties, was 58,000.   Nationally, there were officially 68,000 homeless college students.   Such official figures are considered to be on the extreme low side of actual reality.

Various social service providers report, while lack of income, disabilities, sickness, mental health issues and substance abuse all contribute to homelessness, the primary reason Americans are homeless is lack of affordable housing.   This problem is growing worse according to mayors and other city leaders nationwide.

Regardless of religious, political or other persuasion, there is no excuse for citizens of the United States to allow even one veteran to be homeless.   Nor is there any excuse to allow one senior, one child or anyone else to remain homeless.   Politicians failing to make helping the homeless a top priority should never be elected and be permanently removed from office.

Americans who sit idly by and make no attempt to address and alleviate problems of poverty in our nation, openly display a severe lack of patriotism, historical and moral understanding and, a total  absence of maturity, self-respect and dignity.

Do Americans who ignore the plight of homeless veterans really support the troops?   Can we march in parades waving flags pretending to be patriotic while continuing to ignore our growing homeless population, regardless of the reasons why they are homeless?

What manner of nation claims to be the greatest nation on earth and a beacon for freedom and democracy, while millions of her own citizens live in open squalor?